So You Want to Be My Muse – New Film!

The newest film based on my 100-word stories is here! Actors Grant Langdon and Erica Erickson put in some sexy and mysterious performances in this adaptation by Taylor Geiman (who also directed). (You can find the story the film is based on below the video.) 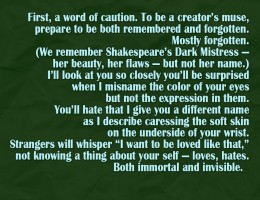 Read more So You Want to Be My Muse – New Film!

Hi guys — here’s the third film in the 365 Film Project. I also want to give a special shout-out to an often unsung, invisible hero: Production Assistant Carley Crowder. She keeps everyone and everything on track and makes sure everyone has a good time while we go through this. So, thank you so much…